In honor of the recent announcement that the Internet Archive is partnering with NASA to archive and manage all of their photographs and audiovisual materials, this blog entry is devoted to space science. The archive has several titles that address our fascination with space exploration, including historic newsreels, educational shorts, TV programs and kitschy ephemera. 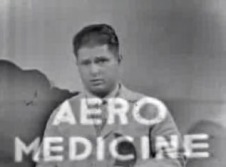 Science in Action: Aero Medicine (1956): In two parts, Part I and Part II. Science in Action was a 1950’s TV series produced by the California Academy of Science. The host was Dr. Earl Herald, a Bay Area science community mainstay from the Steinhart Aquarium. This episode: the physiology of space travel! What happens to the human body during launch, and in orbit?

Space History. Reds Orbit Two Craft (1962): In this newsreel, “the Russians chalk up another victory in the space race, as they put two manned spacecraft into orbit within 24 hours.” Cue ominous “Reds” music …

The Big Bounce (1960): A detailed overview of NASA’s development of Echo, the world’s first passive communications satellite, with layman’s terminology galore to explain why the satellite is relevant and important for the average person, “For instance, we would like to see live television programs, history in the making, from all over the world. But TV broadcasting presents a special problem. One TV channel requires the space of almost 1,000 telephone circuits.” Technicolor makes for some gorgeous archival imagery here.

Net Café: Space Science (1998): The Internet Café was a TV program that ran for seven years in the late 1990’s to early 2000’s, covering early web culture from the vantage point of the average internet café. This episode is a fantastic overview of the presence of space culture on the web circa 1998.

Way Stations In Space (1961): Despite the fact that, as one user mentions, “the physics are bad” this is still a gem of Cold War ephemera. As archive enthusiast “Spuzz” points out, this is exactly “the type of space race film you would see in the late 50’s and early 60’s to teach people what to expect in space in the next decade or so.”

Highlights 1965: A Progress Report (1965): In three parts, Part I, Part II and Part III. If ever a NASA progress report was eventful, it was during the mid 1960’s. Smack in the middle of the “space race,” the organization gives a fairly technical but fascinating overview of its activities and advancements from the year 1965.

Cheerios (1960): This commercial features “a team of JUNIOR spacemen with an OUT OF THIS WORLD breakfast!”

Space Ace: Commercial for a video game that features a character named Dexter, who’s been blasted with an “infanto-ray” by the evil commander Bork and turned into a child. The goal of the game is to “run the bad guy out of the solar system and regain your manhood.” For more on this quest, see the “Reds Orbit Two Craft” film one more time. Pay attention to the ominous music.

This entry was posted in NASA Images, Video Archive. Bookmark the permalink.